Discovering the wilderness and ancient tribes

This is our perfect safari in Tanzania. A combination of the best national parks in Tanzania with the unparalleled experience of discovering ancient tribes. This amazing country is honored with three of the planet’s richest animal spaces: Tarangire National Park, the Ngorongoro Crater, and the Serengeti National Park.

In this tour we add something unique, something not exploited by the mass tourism, some visits to villages and tribes not visited by the majority. We make a unique journey, a trip back in time to the beginning of our origin to learn how the ancestors of the first hominids live.

If there is a place where time seems to have stopped, that is of course the Eyasi Lake where the Datoga and Hadzabe tribes live. Many travelers confirm this tour after their trip as the most complete safari to visit the country of Tanzania and its tribes. This is one of the most special Tanzania safari tours you will find. Let us help tailor-make your luxury Tanzania safari!

How are our safaris in Tanzania?

Our safari tours in Tanzania are filled with unique moments that will be etched into travelers’ memories. Some examples of exclusive activities include trips by hot air balloon over the most beautiful landscapes in Africa, such as the Serengeti National Park or hikes to the old volcanoes, Olmoti or Empakai at the Maasai land in the Ngorongoro Conservation Area.

There is also, of course, getting up early to set out on a safari to see the big five, sit around the campfire under the stars of the Serengeti, or among other experiences that will leave you speechless.

Our commitment to the environment and the local communities is extended to our safaris. We want travelers to discover the way of life of the tribes through different experiences, collaborating directly with them. 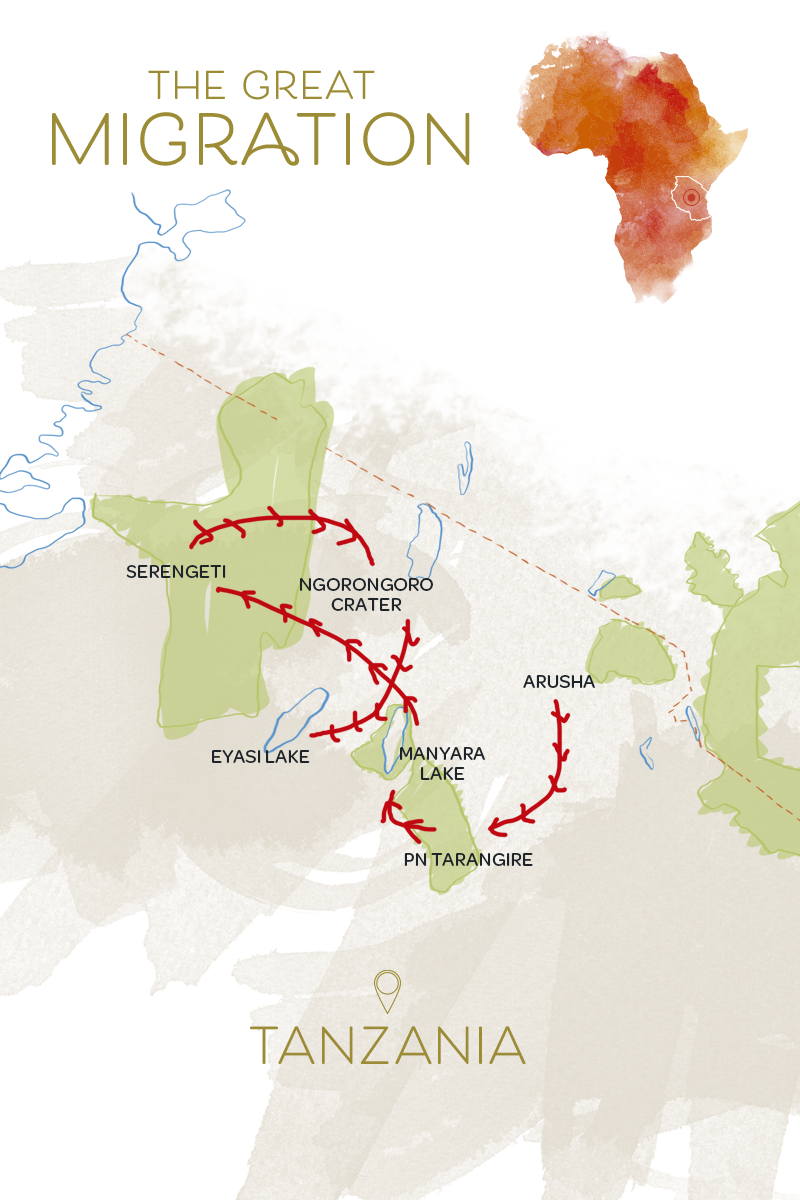 Why you will love this trip

A unique experience is to meet the still hunter-gatherers of Africa, the Hadzabe and Datoga tribes who continue to live true to their traditions.

Enjoy the best safaris in Africa in the Serengeti or in the Ngorongoro Crater thanks to its large population of wild animals during the whole year.

Our tented camps are situated in the most exclusive locations in the national parks. Pakulala Safari Camp is perched in the ring of the Ngorongoro´s crater.

Flight to Arusha where your driver-guide will pick you up and transport to the hotel where you will rest to start fresh the safari on day 2. Relax ar Four Points by Sheraton. The Arusha Hotel.

The mix vegetation of palm trees and baobabs along the Tarangire riverbanks is very characteristic and is where the majority of the animals are seen. In addition, being lowlands and therefore hotter, it is possible to see lions, giraffes, buffalos, leopards, cheetahs, impalas, zebras and other species not so common as the minor kudu, the orix or even the sable antelope.

In Tarangire National Park you can do fly camping as optional experience, a modality of accommodation that will let you discover the essence of the old-style safaris, guarded by a giant baobab and by the ranger of the tented camp. A mosquito net on the highest hill of the Tarangire will be the only thing that separates you from the African magic.

After enjoying this majestic park, we continue on the Maasai Lands, tribes of nomadic shepherds. The Maasai have inhabited these lands since thousands of years and are still following their traditions. We direct our steps towards one of Tanzania’s most unique gems, Lake Manyara National Park. A small park of only 330 square kilometers of which 200 occupied by the lake. Lake Manyara stretches over 50 kilometers undergoing dramatic transformations throughout the year. Its physiognomy changes completely from the rainy season to the dry season. Its fauna includes large mammals (giraffes, leopards, lions, hippos) and more than 400 species of birds including a huge population of flamingos on the lake.

During the dry season, from June to December, the level of the lake falls significantly, and large mammals need to get closer to water. Then it is more frequent to see the owners of the place: the elephants, lions and leopards lurking to the buffalos and giraffes that come to drink to the lake.
* Note.- The safari in Manyara can be done on the afternoon of day 3 or in the morning of day 4.

We say goodbye to Lake Manyara after a safari at dawn and headed towards the mythical Serengeti NP, the natural prolongation of the Maasai Mara National Reserve in Kenya. Is between Maasai Mara and Serengeti where each year, between July and October about a million and a half of wildebeest, 250,000 zebras and half a million gazelles, followed in short by lions and hyenas create what is called ‘The Great Migration’, one of the most breathtaking shows of nature.

In the tented camp, the staff will warm the water for your private bath and shower, so that at the end of the game drive, you can relax before a wonderful dinner under the stars.

Second day in the middle of the Serengeti. The best safaris, or at least the most likely to witness hunting scenes, take place at dawn, when the nocturnal animals are still active, and at dusk. We will dedicate these moments to meet the “big five”: lion, buffalo, elephant, rhino and leopard. In addition to these indisputable protagonists, we will see large herds of herbivores.

We will sleep in one of the largest wildlife sanctuaries on the planet, the “endless plain”. Its landscapes is the one that everybody dreams when thinking about Africa: large spaces, deep blue skies sprinkled with clouds, fresh sunrises and sunsets of fire, and at night, a unique display of stars.

We will visit a Maasai Boma (Maasai Village) to experience its ancestral traditions on the way to our next destination for tonight. Pakulala Safari Camp is located above the Ngorongoro´s crater. Our camp is just on the rim of the crater, offering a spectacular view over the area in an exclusive location.

At sunrise we get into 4×4 vehicles inside the Ngorongoro Crater for our game drive. No reserve offers such a magnificent show as the Ngorongoro Crater. A volcanic caldera of 600 meters of depth and more than 20 kilometers in diameter containing the highest permanent concentration of African wildlife. Spectacular scenery, inhabited by more than 40,000 Maasais shepherds, dominated by the Rift Valley and the nine volcanoes more than 4 million years old. The only volcano currently active is the Oldoinyo Lengai, the Maasai God’s Mountain. The Ngorongoro crater, grazes thousands of wildebeests, zebras, buffalo, gazelles, lions … which, unlike the Serengeti, do not migrate because of the continuous presence of water.

After our unique and exclusive experience inside the caldera of the so-called garden of Eden, we direct our steps to the Lake Eyasi. Untouched by other routes, if there is a place where it seems that time has stopped and civilization has not yet arrived, no doubt that is the land of the Datoga and Hadzabe tribes or the land of the Bushmen. A small and remote place where they still live from the little hunting and the harvesting of wild fruits and roots.

Very early in the morning, walking among acacias and majestic baobabs, we will be surprised by these tribes dressed in small tanned skins and necklaces made by fruits and seeds observing us with sincere curiosity. It is the Bushmen who receive us with his unique language, clicking the tongue. To go hunting with the Hadzabe is an experience. We will walk with them in the savanna that surrounds Lake Eyasi to know firsthand what is the survival.

Transfer to the airport on the same day only for flights starting from 7pm.
For flights with departure earlier than 7pm it is mandatory to book an extra night in Arusha.

*Note.- The order of the safari itinerary can change according to the hotel availability, maintaining always the same activities.

What our adventurers say

Behind each one there is an unforgettable experience

A spectacular experience with excellent service and coordination. We have traveled almost all over the world and the attention received from all the team has been excellent. The Maasai Mara, Serengeti and Ngorongoro camps are spectacular. We have felt at home, cared for, pampered, the food excellent. We are delighted
Josep
Pakulala is a welcoming campsite to take a young family (son7 & daugher 9). We stayed at Pakulala for 2 nights on the edge of Ngorongoro Crater. The camp gets 5 stars for the great views into the crater, delicious food and wonderful staff.Sitting around the campfire at night was very special
Boucher83
Terrific staff, extremely comfortable and weather-tight tents, great food and an overall wonderful wilderness experience! Relaxing common area with a fire bowl during the evenings. Animals wander all around us at night, but the staff and lodgings left us feeling safe and cozy. Outstanding experience
Flagg M